Paul Nicholls is hoping Saint Calvados will have a fitness edge over his Ascot Chase rivals on Saturday, Sky Sports Racingas Irish raider Fakir D’oudairies heads the field of eight.

Saint Calvados has not been seen since making his debut for Nicholls in King George VI Chase at Kempton on Boxing Day when finishing a solid third behind Tornado Flyer and stablemate Clan Des Obeaux.

The former Harry Whittington resident, a Grade Two winner over fences, is set to step back in trip to two-and-a-half miles this weekend as he makes a second appearance since wind surgery.

“It was an obvious race for him after Kempton,” Nicholls told Sky Sports Racing. “There’s been a doubt about whether he gets three miles but we haven’t had him long enough to prove that yet.

“Everything at home suggests he wants every bit of three miles, but he’s a lot sharper on the track.

“He ran very well in King George and this fitted in nicely en route to running in the Ryanair at Cheltenham.

“We’re still learning about him but on his best form you’d have to say he has a chance.

“He’s a lot fitter than he was going into Kempton. We’d done as much as we could in the time up until Kempton, where he got a little bit tired. We’d got involved in the battle soon enough.

“He’s a lot sharper now and has had a clear run since then. I’m very happy with him.”

On Fakir D’oudairies, Nicholls said: “He’s a decent horse but he appears to have been quite busy. Several of these have had some hard races recently.

“The fact that we haven’t run since Christmas could help us being a little fresh.

“There are eight good horses so it’ll be a hard race to win.”

‘Fakir’s best chance of a Grade One this season’ Kevin Blake, racing manager to Fakir D’oudairies’ trainer Joseph O’Brien, is expecting a close contest, but believes their horse has his best chance of a top level success this season.

“It looks quite tightly knit when you’re talking about these horses at their very best,” Blake told Sky Sports Racing.

“Fakir at his very best was winning the Melling Chase at Aintree last season over this type of mid-range trip. But, you look at the form of that race and it wasn’t like he was beating an array of Grade One horses and he has been beaten a few times since.

“He’s been a small bit frustrating because he’s a good jumper of a fence but has been vulnerable to a mistake the last twice. 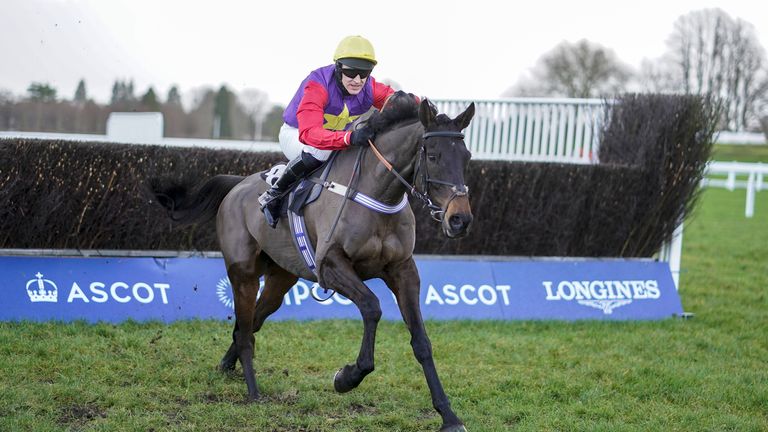 Trainer Jeremy Scott is hopeful of a big run from Dashel Drasher on Saturday as he bids to defend his Ascot Chase title.

“He wasn’t a favorite when they initially priced up this race and I thought he was a big price initially but the market has reacted and now he’s a favorite.

“He might not get many better chances to win a Grade One this season.”

Blake is hopeful that Fakir D’oudairies’ travel plans will not be affected by the stormy conditions forecast ahead of the weekend.

With heavy rain a possibility at Ascot before Saturday’s race, conditions are likely to be very testing for the runners, but Blake is confident Fakir D’oudairies will handle it.

“Conditions will not be a problem,” he said. “They’re expecting a bit more rain and it’s currently soft but he’s a horse that has been pulled out a couple of times when the ground was on the sounder times so no matter how much rain falls I don’t think he’ll be at an inconvenience.

“Hopefully he gets over there in one piece. He’s traveling today and the weather is going downhill from tonight onwards.”